Miory Steel has announced the production of its first batch of tinplate from its new electrolytic tinning unit. 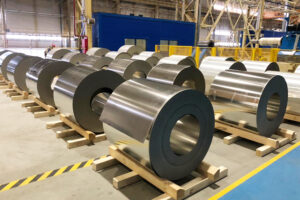 Deputy General director for production Vladimir Dyakonov said “The first batch of white tinplate was produced in the amount of 150 tons. And we have completely worked out the technology. All operations are simply carried out continuously in one machine at a speed of up to 520 m/min. We have achieved synchronization and non-stop operation of the entire line. As the result we’ve got a high-quality tinplate tinplate”.

The plant will cover the needs of Belarus in tinplate (this is about 30 thousand tons / year), however, most of the products under the Miory Steel brand will be exported.

“Currently, we are in the process of obtaining certification of our tinplate according to European and Russian standards, testing each roll, eliminating minor flaws and preparing to bring the unit to full production capacity – which is 150 thousand tons per year”, summarised Mr Dyakonov.